We met a lot of hamsters at 4 pet shops. 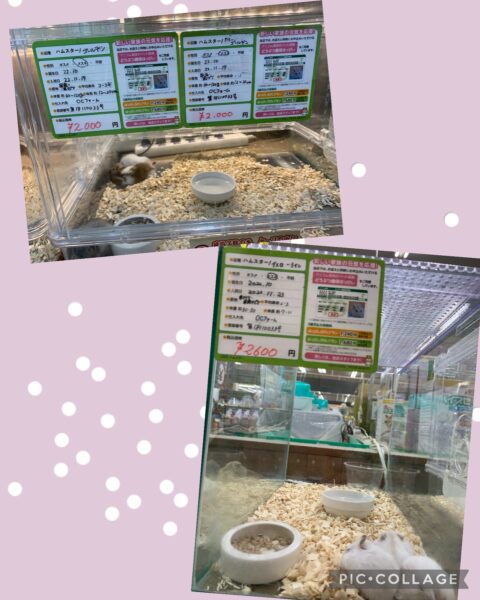 Hamsters at the first pet shop.

We visited 4 pet shops to welcome them.

We checked hamster’s health and the breeding environment in a pet shop.

The first pet shop we stopped by after my daughter’s basketball game.

There were small hamsters about a month old, but they were all female. 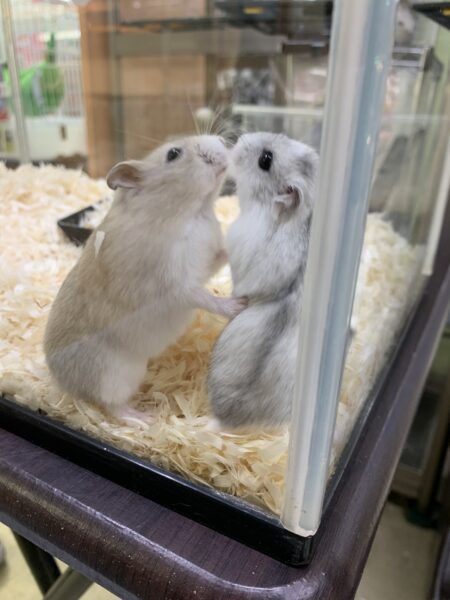 At the next place we went, the hamsters were comfortably bred, but some had long hair and some were too old.

Long-haired hamsters were so cute, but it seemed difficult to care for.

The next pet shop’s hamsters were being bred poorly.

There were little floor materials, and pee was conspicuous.

I wanted to know their personality, so I let them sniff the back of my hand, then, they tried to bite me.

The pet shop staff didn’t seem to know much about hamsters.

I felt sorry for the hamsters there, but I didn’t feel like welcoming them.

The shop sold hamster goods at low prices, so we bought a few things. 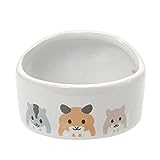 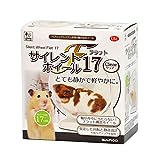 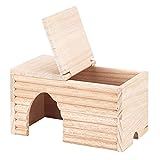 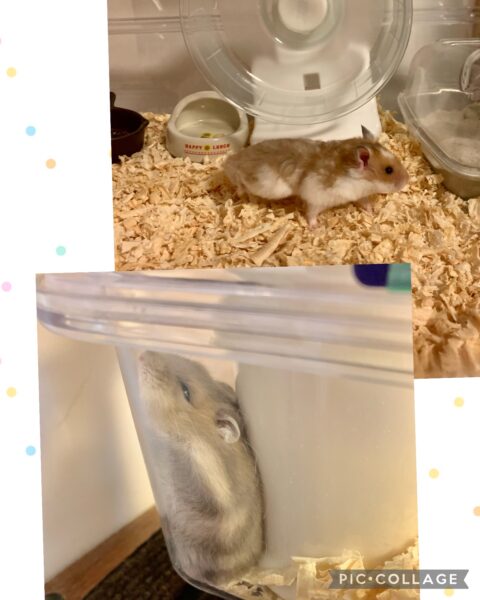 The fourth pet shop was a little more expensive, but the breeding environment and staff were wonderful.

The energy of the shop itself was bright.

There was an elderly store manager who seemed to be familiar with pets in general.

We asked them to show some hamsters.

A female part-time clerk served us.

The hamsters were treated with care and were well attached to the woman. 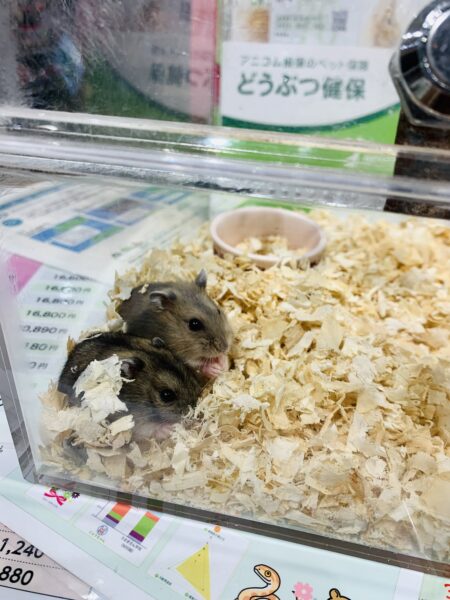 Chorosu and his brother at the pet shop

We wanted to have a male yellow-pudding hamster but there wasn’t.

They were so cute and friendly.

They don’t bite our hands.

We decided to have light-gray one.

Chibisuke and satin hair his brother at the pet shop

Next, we were shown golden hamsters.

There were 2 male golden hamsters.

They looks very happy and curious.

Both of them were two months old.

I wanted to have a hamster about a month old, but somehow I felt that these hamsters were destined.

From the previous reflection, we wanted a normal hamster that not been breed-improved much.

The pet shop didn’t have a simple normal hamster.

One had a rare satin hair quality, and the other had a rare appearance with a spotted pattern.

We couldn’t decide for a long time as to which hamster to choose.

When my daughter touched hamsters, the hamster with satin hair bit her finger.

It was caused by my daughter touching too much, but we thought that this was also a sign, so we decided to have the spotted hamster.

A new life has begun with them. 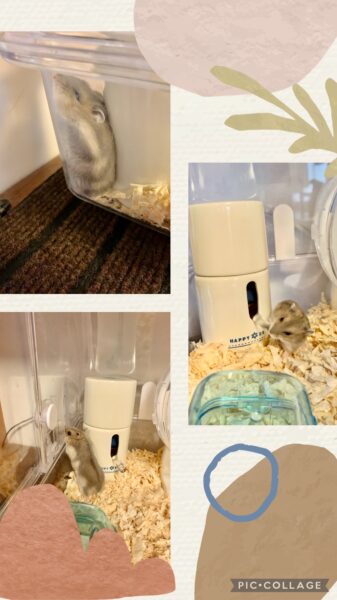 Choros is the 6th hamster in our family, and Chibisuke is the 7th one.

Based on what the hamsters have taught us so far and what we learned again, We would like to improve their quality of life and make an effort to become a comfortable family. 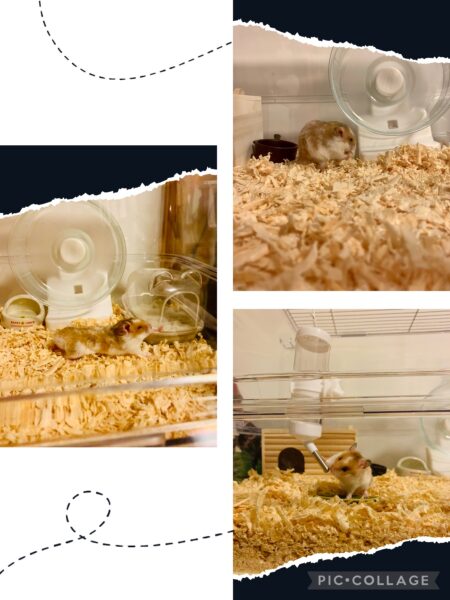 They had a notebook about hamsters in her hand, and tided up their cage.

While worrying about whether the hamsters are having a good time, they keep distance and suppresses their enthusiasm so as not to irritate the hamsters too much.

We decided to keep the hamsters in the warmest living room and I plan to keep air conditioner on all winter.

I bought a new very large cage for our golden hamster and I decided to use the cage used by the previous Golden Hamster for Djungarian. 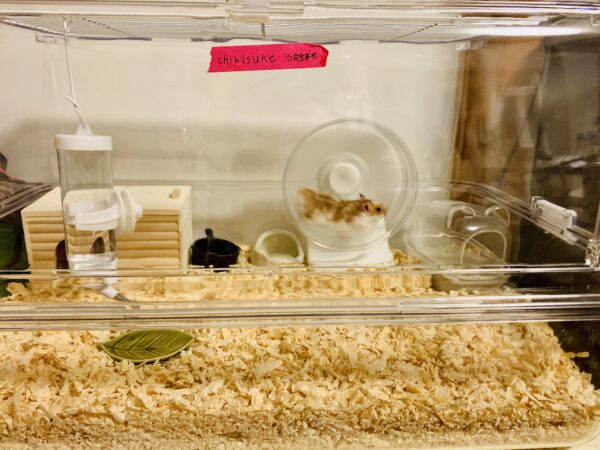 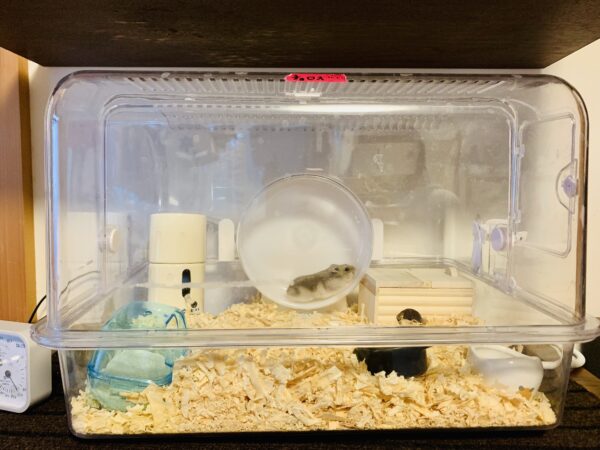 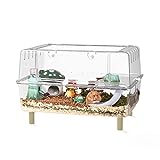 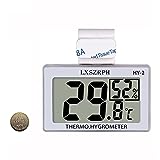 I bought two thermometers that can be placed inside the cage.

We put pet heaters under each cage and added more flooring material. 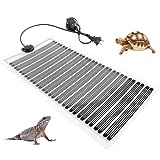 It looks more comfortable than the hamsters we’ve raised so far.

Is it good to have hamsters?

Goon too soon… Say goodbye to my precious hamster in my hands.

We have made many mistakes while entrusting their precious lives of hamsters.

It would be ideal to be able to do it perfectly from the beginning, but it didn’t go so well.

So that they may feel glad to have met our family, we want to raise it carefully.